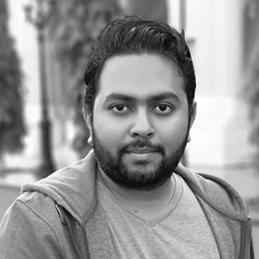 Born on 27th April 1989 in Jeddah, Kingdom of Saudi Arabia. After completing 12th he pursued a Diploma in Visual Effects and Bachelor in Commerce simultaneously in India. To further enhance his skills in digital production Reyan went to Canada to pursue Post-Secondary Degree in Visual Effects and Digital Media. After completing the degree, he did various jobs in Canada for some well-known production houses which include Spin VFX, etc. He has worked on 2 tv shows and 3 feature films as a Digital Artist. Tv shows include Game of Thrones Season 3 and The Borgias. Feature films include After Earth, The Mortal Instruments and Red Machine. He then moved to Oman and started working in a reputed 3d Visualization and Fabrication firm. Currently, Reyan is working as Senior Digital Artist in Muscat and working on some outstanding projects which include 3D Visualizations and Virtual Reality.

His passion is to keep creating eye-catching visuals and contribute to technology for the betterment of the society. His long-term goal is to contribute as much as he can to raise the standard of living of everybody. To do that I have a specific set of skills which is 3D Visualization. Through which Reyan can almost demonstrate everything. His career goal is to feature the works in every digital art magazine and competitions happening in the world.